In a previous post, I ranted on how cool it would be to use pc-game mechanics in a programming course. Before actually getting down and dirty and try to come up with an actual system for this I surveyed my students to see if the idea has any resonation with the target audience, the students themselves, or not. Now it is very interesting to mention this cool project by Jonas Swiatek who is actually implanting a MEF-based extension for Visual Studio 2010 to allow achievements while coding! More on this project in a later post, but you should definitely check it out if you want to have a feeling of how achievements could be used in a programming environment.

56 of my students filled in a short, only survey consisting of 10 questions (the limit with the basic account on surveymonkey.com).

The first set of questions concerned their current gaming behaviour and resulted in the following answers: 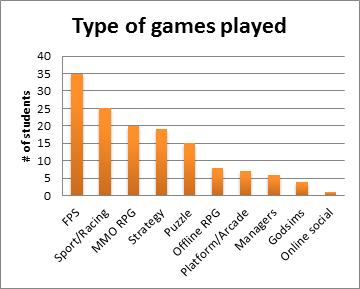 The last set of questions was to see what stance students had to my achievement-based labs’ proposals:

After the survey, students had the possibility to give additional feedback and comments. Some of the more interesting and funny ones were (translated from Dutch):

“Original idea! The system could use a ranking system where one could level up by making lab exercises…. We call it Call of C# =D “

“This idea is only feasible and fun for us [the students] if no additional work by us is required. By this I mean that we don’t have to go to some site ourselves to fill in our reached achievements.”

“Is this appropriate for a bachelor-oriented education? It looks fun for -18 years pupils, not for us…. It sounds a bit… unprofessional.”

“Only the real [game]freaks will appreciate this, the rest won’t bother.”

Drawing conclusions from this small survey aren’t very helpful but I think we can safely state that the idea is viable with one very big but. An achievement-based program course will only work if it really resonates with the students on all aspects: it should be fun, it shouldn’t create additional overhead and it should be really targeted to the audience (being technical adolescents). At least a large portion of the students is definitely willing to give this type of system a chance. The fact that all of our current students play games is also important: no one will feel like they are being obliged to perform an activity they don’t like doing; remember Suits definition of gaming: Playing a game is the voluntary attempt to overcome unnecessary obstacles

3 gedachten over “World of C#-craft part 2: what does the audience think?”